Vergent Power Solutions’ Green CHP E-Learning Center is intended to provide businesses, institutions and communities with a simple guide to better understand the environmental, financial and resiliency benefits of Combined Heat and Power (CHP) and Capstone Microturbines.  As North American policymakers increase programmatic efforts to combat climate change – a trend which we welcome – we feel it is vital to lay out the case for CHP as an environment-positive energy solution that simultaneously provides the energy savings and reliability that the marketplace demands.

See below for answers to commonly asked questions.  If you see a topic that isn’t covered, let us know and we will add it to the guide!

CHP is simply the production of two or more usable energy outputs from a single burn of fuel in a combustion device, such as a microturbine.  By recovering the waste heat and utilizing it to produce hot water, steam, process heat or chilled water, a CHP system increases a building’s energy efficiency.  Whereas a traditional building purchases electricity from a central utility grid while generating thermal energy from a separate process such as a boiler or chiller, the CHP system does the job onsite with one energy system.

What is a microturbine?

A microturbine is a small-scale gas turbine that can run on biogas, natural gas, propane and hydrogen blends.  The Capstone microturbine utilizes patented air bearings that require no oil or coolants and has only one moving part.  Capstone microturbines require very little maintenance and have extremely high reliability.  Because they perform a very lean air and fuel pre-mix prior to combustion, they have ultra clean air emissions.  Microturbines can easily be configured in a CHP application to produce hot water, steam, process heat and/or chilled water using free clean exhaust.  There are over 10,000 Capstone microturbines operating across the world.

How does a CHP system save on energy costs?

A CHP system reduces a building’s energy costs through increased efficiency.  A microturbine can typically produce electricity cheaper than the grid power price.  By recovering waste heat to make usable thermal energy, a CHP system can achieve total system efficiencies of 60-90%, which increases the energy savings even more.  Even when accounting for CHP maintenance costs and the cost of capital, a CHP system can save 20-50% on energy costs for most buildings.

How does a CHP system provide environmental benefits?

Despite the increasing adoption of renewable energy, the majority of grid power in North America still comes from inefficient fossil-fuel based power plants.  Many buildings’ boiler plants are either old and poor-performing or are oversized and inefficiently operated.  A new CHP plant can be right-sized to a building’s electrical and thermal loads for maximum operational efficiency such that nearly all of the fuel’s energy is used by the building, with very little waste.

Is all fossil fuel usage bad for the environment?

Short answer, no – although the addition of more renewable energy is making an impact over time.  However, as more intermittent sources of renewable energy are added to the grid, the need for reliable baseload power grows in order to keep the grid stable.  CHP is reliable baseload power AND thermal energy.  In most of North America, a well-designed and operated CHP system produces less GHG’s than the grid power and separate thermal energy it offsets.  The GHG emissions of non-baseload grid sources vary from state to state, but in almost all U.S. states, a CHP system represents a significant reduction in GHG emissions versus the grid.  For example, in Minnesota, the non-baseload grid sources emit 1,544 lbs/MWh of GHG equivalents, according to 2019 EPA data.  In Massachusetts, which has a much cleaner power grid, the number is around 899 lbs/MWh.  The grid combined with a boiler that emits CO2 at 525 lbs/MWh has a total CO2 emissions rate of 650 lbs/MWh.

By contrast, a hot water CHP system that is 76% efficient and runs on natural gas emits approximately 571 lbs/MWh of CO2, a reduction of 12%.  After factoring in NOx reduction, the GHG equivalency reduction is even greater. So even in states that have fairly clean power grids, like Massachusetts, CHP will produce less GHG emissions.

Looking at another extreme example, the Canadian province of Ontario has one the lowest emitting electricity systems in the world. In 2020, Ontario’s grid was 94% GHG emission free. Yet even with such a clean grid, Ontario heavily relies on natural gas generation for 28% of total generating capacity to avoid blackouts and fill the void left from intermittent renewable sources. Reducing the reliance on natural gas further would have catastrophic consequences on grid stability and the cost of power for Ontario ratepayers. 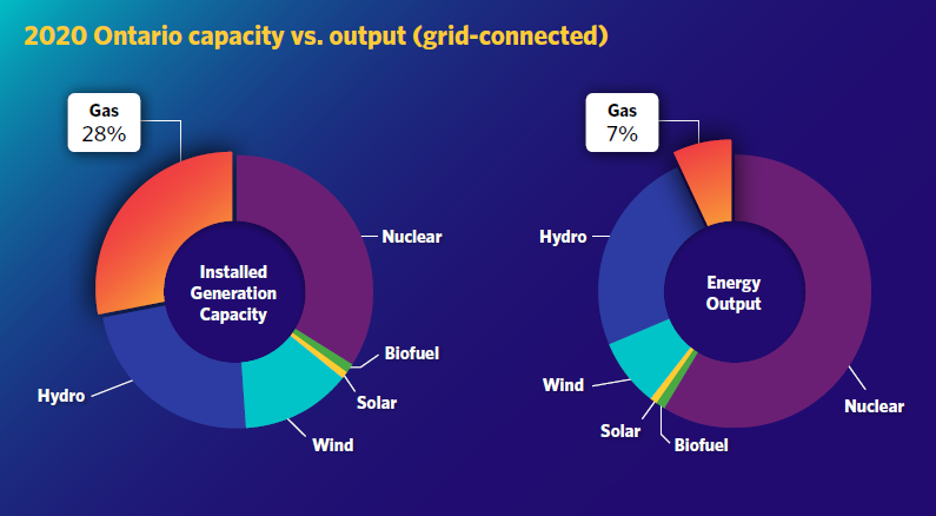 A recent ICF assessment has shown that a natural gas CHP system installed in Ontario reduces GHG emissions when compared to the grid; in fact, a 1MW CHP system installed in 2020 running 24/7 reduces more than 9,000 tons of carbon over a 15-year period, showing that an efficient use of fossil fuels in all jurisdictions reduces carbon output when compare to local utility grids. 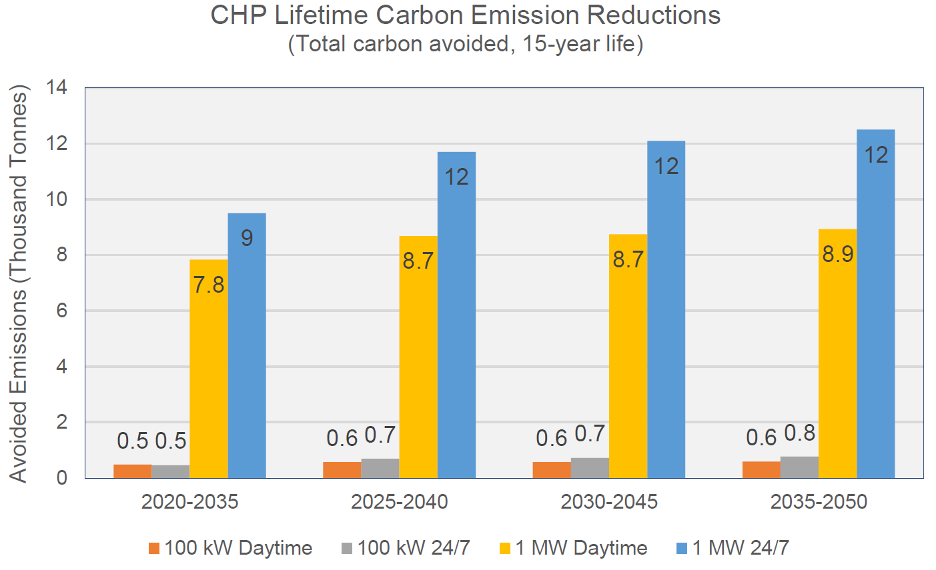 What options are available for ultra clean CHP?

Many options exist for customers that want to be as green as possible to comply with local air permitting requirements or further their organizations’ sustainability goals, such as:

What if my local government is considering programs that discourage fossil fuels?

In most North American localities, natural gas is still viewed as clean fuel and CHP may be eligible for incentives.  However, there are a few states or cities where local governments are pushing for mass electrification of building heat.  Here are some important facts to keep in mind.

Weather-related disasters are increasing in frequency due to climate change.  In addition to the loss of life and property, disasters have exposed the insecurity of the power grid.  CHP provides resiliency to buildings by localizing buildings’ energy supply such that downed power lines and damage to other T&D infrastructure do not impact onsite power sources.  Multi-unit residential buildings, schools and universities, community disaster shelters, data centers, hospitals and many other applications all benefit from the resiliency of CHP systems.  Many building owners choose to install a CHP system rather than a traditional backup generator because a CHP can provide the same energy security but has an economic payback due to its 24/7/365 operating profile.

This is all very complicated; how do I even get started?

Don’t worry, the vast majority of CHP users are not in the energy business.  They are greenhouses, factories, hotels, schools and universities, data centers, hospitals, apartment and condo buildings, municipalities, and the like.  Vergent Power Solutions can develop a CHP project for you and provide a turnkey proposal that is 100% financed and operated by experts.  Contact sales@vergentpower.com or 888.282.2071 to get started on a no-cost feasibility assessment of your building.